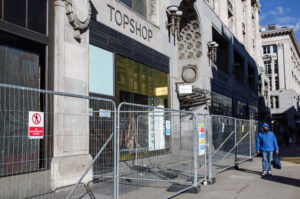 The location would give the Swedish furniture giant a presence in the heart of one of London’s most popular shopping districts.

Sir Philip Green’s retail empire failed to secure funding to pay debts after sales slumped due to the coronavirus crisis.

Ikea’s net income, on the other hand, rose in 2020 as people flocked to buy its furniture in between lockdowns.

According to the Telegraph, proceeds from the sale of the Oxford Street store could be used to pay off Arcadia’s creditors, as well as deficits in the company’s pension fund.

Ikea is known for having large out-of-town stores as well as smaller city centre stores, such as its first ever planning studio in Tottenham Court Road, central London.

Now it is interested in buying the 214 Oxford Street three-storey building, which has been up for sale since May.

Nike and Vans currently have shops in the building, but they will not need to close when the Arcadia asset is sold.

As a result, the retailer announced in July that it would no longer be opening a store at the New Monks Farm development in Lancing, West Sussex, and instead rely on its e-commerce site to serve customers in the area.